What means the Abbreviation ‘BH’ and ‘BHL’?

Was Sweden the place where the Holocaust Extortion Cult started? 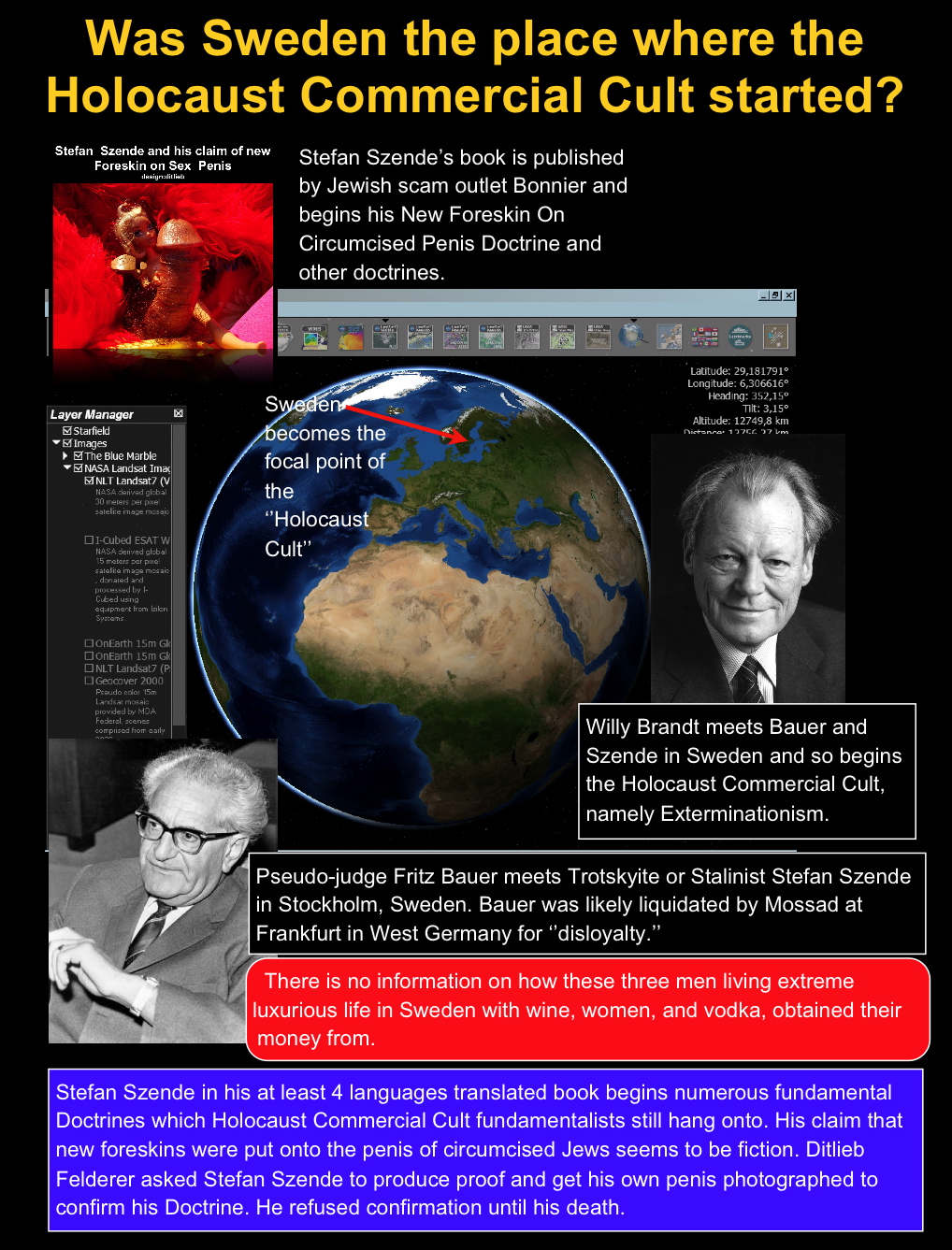 What means the abbreviation of BH and BHL?

Was Sweden the place where the Holocaust Extortion Cult started?

Wikipedia and its Zionist obscurantism

The Hegelian Doctrine allowing the method of Hegemony and obscurantism.

The Doctrine and methods started by the two utterly corrupt State authoritarians misusing their position for personal gain to deprive dissenters of Conscience and Free Speech. Symptomatic with such assaults on Conscience the perpetrators of the crime derive benefits and it becomes a matter of lining one’s own pockets and feathering one’s own nest for all those involving themselves with such Dark Age acts of violence.

Thomas Bodstrom was the son of former Sweden’s Foreign Minister, Lennart Bodstrom, who orchestrated several Terrorist attacks against Ditlieb Felderer and his Philippine wife, almost killing his wife in the encounters.

The father was also much responsible for secretly placing Ditlieb Felderer inside various Sweden Concentration Camps to conceal the criminal activities of the Sweden Foreign Office. This office had deliberately sabotaged France’s violations and committing of Crime Against Humanity, when two Jewish Generals entered the home of the Ditlieb Felderer family home at Innsbruck in Austria, carrying away all its belongings on French military trucks. The family had fled to Italy just prior to the French invasion of home.

The Swedish Foreign Office has ever since done everything possible to conceal the War Crime acts, with its clandestine cover-up operators basking in the limelight, partaking of dignitary meeting and food, and showing off in the best of costumes, all in order to cover-up its concealments and obscurantism.

The son of Lennart Bodstrom, former Foreign Minister of Sweden, Thomas Bodstrom, was a logical outcome of the utterly Sweden corrupt, Justice Minister, Herman Zetterberg, whose yours truly had the misfortune to personally live by.

Sweden’s then Justice Minister, Herman Zetterberg, had secretly introduced numerous Censorship laws at behest of American oath breaking Zionist Jews who came to Sweden for secret talks. Herman Zetterberg was at this time involved in several sex affairs, and, personally had sexual problems along with abuse of alcohol and drugs. After ruining the life of people interested in the knowledge of ideologies, and his personal enemies, he then, along with his wife committed suicide. A tragic event; reminding one of the similarities of Germany’s corrupt Helmut Kohl and his wife, Hannelore Kohl, who also committed suicide. The Media then spun it, that it was not the problem between Helmut Kohl and his dictatorial behavior that she committed suicide but that it was because of her ailment, which, of course could have contributed to it.

But there are further facts involved with the BHL, Bodstrom-Holst Litany secret affairs. Tora Holst became in fact the first woman Inquisitor ever. This profession had prior only been committed by males, not females. Her Witchhunting activities lead her to kidnap a young girl trying to force false Confession out of her with the help of Witchhunter, Rajo Bohman. The spinster girl, Linda Reinolds. repeatedly pleaded with her Tormentors, Tora Holst and Rajo Bohman to inform her, what crimes she had done. In typical Witchhunting style, the Tormentors and Thought Terrorists (TT) refused to do so, except for blaming her of her ‘criminal ideological contacts’ with Ahmed Radio of Radio Islam. It is this matter which the Zionist article in Wikipedia with abstruseness hints to.

Such secret kidnapping of individuals and then drag them into secret places of Star Chamber Court interrogation has been a continuous modus operandi assaults by Sweden’s authoritarian masters who can tolerate no other viewpoints than those set down by the State with its endless corrupt and contradictory bureaucrats launching one obsolete and confused Doctrine after the other which must be followed by the citizens, all in order to cover up the corruption within the State apparatus .

To this date, none of the BH operators have informed the public about the Thought Terrorist (TT) crime by means of words which this young child dragged for Inquisition interrogation have stated. This has resulted in that both BH assault operators, Lennart Bodstrom and Tora Holst, have been accused of doing their assaults and depredations of human dignity for pure personal gain. To line their own pockets and to feather their own nests.

Inquisitor Tora Holst has sine climbed up the high ladder steps in the Swedish bureaucracy. Few people know that she was the Prosecutor in the Sweden Prime Minister, Olof Palme’s death where she falsely accused Christer Pettersson to have killed Olof Palme in order to help the wife of Olof Palme out, Lisbet Palme.

As Judge for that political Show Trial, stood another corrupt judge, Lennart Groll, a totally corrupt judge specializing in court convictions with courts running by people politically chosen of his own nature and color. The corrupt, Lennart Groll, was also involved with the false convictions of Ditlieb Felderer and Ahmed Rami in several Censorship Show Trials, which fake operative handling the Sweden authorities have done everything to cover up. There again, a variety of Thought Terrorists acts have been employed, gaining money and benefits from the Show Trials to those engaged.

It is interesting to know, that none of the above information has ever been denied by those involved. Seemingly they are fearful of that yet more criminal behavior be leaked out, should they enter into a divulgement of the Witchhunting and Witch Trials.

Thomas Bodstrom illegally invaded the home of Ahmed Rami, falsely using an obscure Censorship law using Tora Holst as clandestine operator. Sweden has done its best to cover up these criminal acts but most of it are concealed under the Ahmed Rami Wikipedia article of 30 May 2014. For obvious reasons it covers-up the background to the events of the invasion of criminal insurgent elements of a private home without a cause, and without a Search Warrant or any type of legal document. Everything, like so much in Sweden, was done under cloak and dagger, personal ambition for promotion in a bureaucratic system gone wild.