THE USE OF NAVI PILLAY OF UNITED NATIONS HIGH COMMISSIONER FOR HUMAN RIGHTS FOR IMPRISONMENT, CENSORSHIP, AND TORTURE

SWEDEN WAS BEFORE STALIN PUTTING PEOPLE INSIDE MENTAL INSTITUTIONS FOR THEIR BELIEFS OR DOUBTS: The same time United Nations was created, the same time Sweden incarcerated people inside Concentration Camps and Mental Institutions for the mere sake of quoting and being interested in Comparative Religion. All while Sweden signed papers to the contrary, even avowing respect for UN Article 19

Everyone has the right to freedom of opinion and expression, this right includes freedom to hold opinions without interference and to seek, receive and impart information and ideas through any media and regardless of frontiers—Article 19, Universal Declaration of Human Rights, adopted 10 December 1948.

Things the State media won’t tell you. UN Madam Navi Pillay is entering the former Auschwitz Sport and Relief Camp via the sign of the Main Gate. Facing her, to the left, is the largest building, the huge Kitchen which Stalin painted black to hide it as it contradicted his Starve Doctrine. The odor of its delicious smell permeated the whole of town Auschwitz. To the right in coming up is the Auschwitz Brothel for the Reliefers and which the Jewish Sonderkommando vigorously used, such as Hermann Langbein, Kazimierz Smolen, Tadeusz Szymanski, Brandhuber, Filip Muller, and others. Going straight up, she would come to the Auschwitz Olympic training Swimming Pool. To the right, Block 10, where kids were born

Facing UN Navi Pillay, to her left, would be the largest building inside the Auschwitz Recreation Sport and Relief Camp, the huge Kitchen, which Stalin painted over from white to black to hide it to comply with his Starve Doctrine. Here the Jewish Orchestra also played their Auschwitz Waltz and other popular music. To this date the Kitchen is kept secret by the Auschwitz Vomitorium. The potent food odor coming from the super modern Kitchen, the most modern in whole of Poland; had its delicious vapor filling the whole surrounding so even the Auschwitz town people could smell it.

Facing UN Navi Pillay, to her left would be the Auschwitz Brothel, Block 24, used by all the former Auschwitz Directors, such as Szymanski, Brandhuber, Wasowicz, Langbein, Filip Muller, and others, along with the Jewish Sonderkommando.

Going straight up, UN Navi Pillay, would come to the Auschwitz Swimming Pool. This type of a pool is used in world competition up to this day, with world records struck virtually every year. 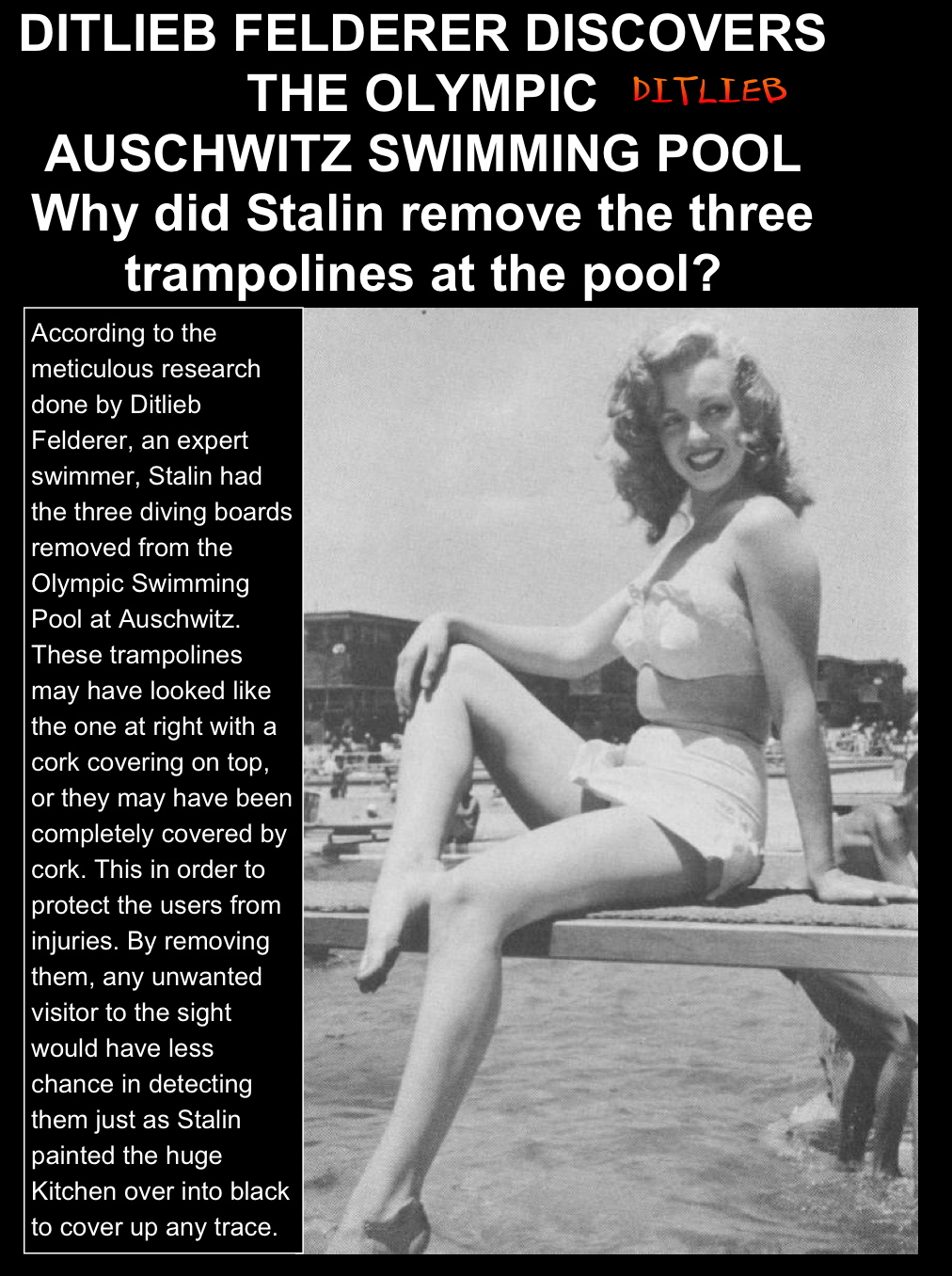 Straight up, going to her right, Navi Pillay would come to Maternity Ward, Block 10. USA Dick Cheney may have visited it on January 27 or 28, 2005. Conflicting days have been given. They are coming out of the former Soccer or Auschwitz Football ground. Facing Dick Chiney, to the right was Block 11, used to hold Pyromaniacs, Rapists, Murderers, Embezzlers, Child Killers, Serial Killers, War Criminals. They also used the court for ball playing.

UN Madam Pillay appears with the Wailing Wall cake inside the football court between Block 10 and 11. To her left is Block 10 where thousands of kids were born, and according to Stalin reasoning, all while the Jewish Orchestra played their Auschwitz Waltz and danced. All supposedly done while the Jewish Sonderkommando killed their Six Million Martyrs. Who be the first to make a Monty Python movie on this one?

ditliebradio The use of Navi Pillay of United Nations High Commissioner for Human Rights for imprisonment, Censorship, and Torture
%d bloggers like this: