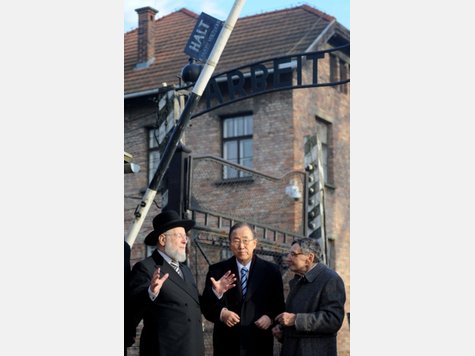 WHAT JOINS HD AND TT MEN TOGETHER IS THEIR INTOLERANCE AND DENIAL OF FREE SPEECH. HD and TT United Nations Secretary-General, Ban Ki-moon is standing near the Main Gate with Arbeit Macht Frei sign. Was he told that to his left was the Auschwitz Brothel, Block 24, which former Auschwitz For War Museum director, Kazimierz Smolen and his companion Hermann Langbein and others used? To the right is the largest building inside the Recreation Center, its huge Kitchen which Stalin painted over from white to Black, hoping to hide it. It was also here where the Jewish Orchestra played their beautiful Auschwitz Waltz and other music. They used to train inside the Auschwitz Theater. Straight up the road you come to the Auschwitz Olympic Swimming Pool.

THE ORIGIN OF THE HOLOCAUST SEX CULT AD THE JEWISH OLAH SEX CULT
‘HOLOCAUST’ IS NOT HEBREW BUT GREEK. SO WHY DO THEY USE A GREEK TERM FOR A JEWISH WAILING WALL LAMENTATION CULT?
In order to sell their Holocaust Extortion Cult the Zionists cover up all traces of the past

The Holocaust Extortion Cult, the HEC Cult, Exterminationism, has its origin in a Hungarian Jew Stefan Szende who moved to Sweden and who got the Jewish Bonnier publishing firm to peddle his fantasies about Belzec and other places. Stefan Szende had been accused of being a ‘Nazi Collaborator’. The Dean of Exterminationism, Stefan Szende’s main proof of that he was not a Nazi Collaborator, was his Penis. The Father of Exterminationism, claimed, that Jews put onto their Penises a new Foreskin to fool Hitler. Hence Jews did not survive because of collaboration, but because of their Penis. This claim has many similarities to the length of Penis law when entering the Jewish Temple in Jerusalem. There and then, if your Penis was too long, you were Denied entry. The ‘Denial Doctrine’ had its beginning already here as Ditlieb Felderer pointed out long before the ‘Holocaust Denial’ and ‘Holocaust Denier’ terms begun. The ‘Denial’ issue is very old as is the ‘Selection Doctrine’ issue. You were Selected by your Penis whether you were allowed inside the Jerusalem Temple. The women of course were denied entry.