We just dispatched from africaholocausts@yahoo.com an open request to United Nations men Peter Launsky and Kimberly Mann about the UN Press Release Note No. 6403.

How do we know they are racketeering? That there does not exist ONE bona fide educator in any of these 63 countries? That they are all linked in with Scofieldism, Dispensationalism, and the Zionist Synagogues, if they even have one. We wait and see.

We have been in this work since the l940’s right from the horse’s mouth of Sweden’s Minister of Justice, Herman Zetterberg, who put into Swedish laws, laws of Censorship American Constitution breaking Zionist Jews brought to Europe. And Herman Zetterberg lived right in the house we lived in! You couldn’t get any closer than that. Herman Zetterberg may have been a sex educator, but nothing more than that as he performed his sex acts right before us in the hotel we lived in.

But these are facts not directly involved here. We need to get hold of the name list of ‘educators’ and we can determine with certainty that this is not yet another Bernard Madoff gimmick or the Flat Earth Society trying to grab a hold of our money. 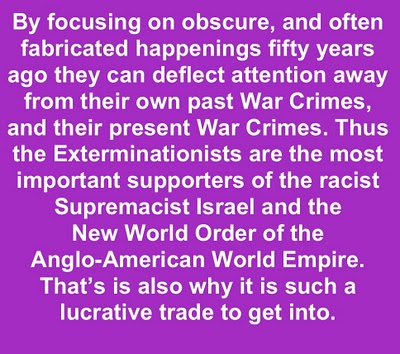